We’re on the board!

THE MONOPOLY: WARRINGTON EDITION GAME... and we’re on the board!

Warrington has landed the honour of its very own edition of the world’s most famous board game, MONOPOLY: Warrington Edition.

On the 25th October, 2022 Warrington became the very FIRST place in Cheshire to get its own board after seeing off 19 other locations across the county.

ALL the famous multi-coloured MONOPOLY property squares like Mayfair and Park Lane from the classic MONOPOLY London original are represented by Warrington landmarks and organisations.. and we get to feature too!

We appear on the board (between Park Lane and Mayfair), on the reverse of all the property cars and on the front of the box!

”We have been wonderfully spoilt for choice putting this unique game together,” says Jennifer Lau, Custom Games Executive at Winning Moves UK. “It’s a board celebrating Warrington’s past and present and is very much reflective of the times.”

Over the last 25 years Winning Moves UK and Hasbro have produced official version of MONOPOLY in places all over the world from Sydney to Dubai .. and now Warrington.

The MONOPOLY: Warrington Edition game is available at Waterstones, WH Smith and extensively online, including on Amazon and Booghe. 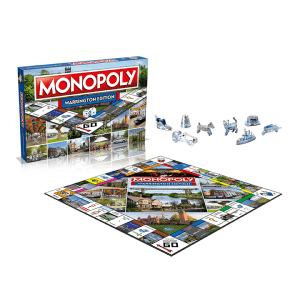 MONOPOLY first hit shelves in 1935 with the Racecar, Thimble, Boot, Top Hat, and Battleship among the original set of MONOPOLY tokens while the Scottie Dog and Wheelbarrow were added in the early 1950s. Although the brand has evolved over the past 87 years, the gameplay and iconography of the classic MONOPOLY game has remained unchanged, making it a timeless classic sure to be enjoyed by future generations. Today, MONOPOLY is the world’s favourite family game brand and is enjoyed by more than one billion players in 114 countries across the globe.

Hasbro is a global branded entertainment leader whose mission is to entertain and connect generations of fans through the wonder of storytelling and exhilaration of play. Hasbro delivers engaging brand experiences for global audiences through gaming, consumer products and entertainment, with a portfolio of iconic brands including MAGIC: THE GATHERING, DUNGEONS & DRAGONS, Hasbro Gaming, NERF, TRANSFORMERS, PLAY-DOH and PEPPA PIG, as well as premier partner brands.

Hasbro is guided by our Purpose to create joy and community for all people around the world, one game, one toy, one story at a time. For more than a decade, Hasbro has been consistently recognized for its corporate citizenship, including being named one of the 100 Best Corporate Citizens by 3BL Media, one of the World’s Most Ethical Companies by Ethisphere Institute and one of the 50 Most Community-Minded Companies in the U.S. by the Civic 50. For more information, visit www.corporate.hasbro.com.

Our team of specialists will advise you on the real value of your property. Click here.

Thanks, we’ve sent your details to your local branch for registration

We match buyers with their perfect home - typically 24 hours before they appear on the property portals. During these strange times we feel it’s best to be able to buy a home before you view. Which is why hot buyers are notified first. If your not hot, don’t worry we can help you with that.

We match buyers with their perfect home - typically 24 hours before they appear on the property portals. During these strange times, we feel it’s best to be able to view a home online before you view in person. Which is why hot buyers are notified first. If your not hot, don’t worry we can help you with that.